As the dust from the broom settled quietly into the pan, the old shop keeper quickly inspected the tiny particles before disposing of them into the waste basket behind the counter. The shaking of the dust pan naturally disturbed the position of the waste basket which, in turn, disrupted the previous safety the small mouse had been enjoying. With his cover now blown, the mouse darted around the corner of the counter and out across the uneven wood floor, scurrying quickly away from the potential danger. The old man jumped with surprise and then watched carefully as the mouse cleared the length of the room only to disappear into the outside wall of the shop, opposite the counter. As his eyes focused through the thick lenses of the glasses he wore, the shop keeper noticed a small crack in the wall where it met the floor, a little mouse hole. The shop keeper leaned on the counter, propping his head in one hand while rubbing his thick grey whiskers, deep in thought, as he stared across the room. 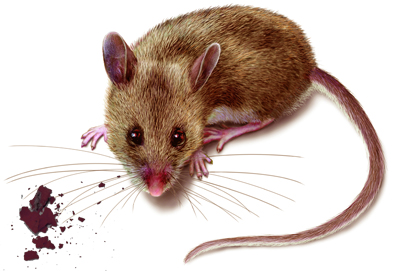 “I can’t have a mouse living in my shop!” he mumbled under his breath, followed by the pounding of his fist upon the smooth wooden counter top. “Tomorrow, I’ll be gettin’ rid of him!” With his final thought decided, the old man finished his nightly duties of closing up the store for the night. Tomorrow brought with it the beginning of a weekend, and as far as the old shop keeper was concerned, the eviction of this newly discovered guest!

Saturday morning came with the old shop keeper waking up early and heading into town, mouse traps in hand as he planned to get rid of the unwelcome rodent that had taken up residence in his shop. He didn’t need to open for a few hours and hoped to have things wrapped up by then, but the mouse had other plans, including no intention of leaving!

The mouse, unbeknownst to the shop keeper, had actually been living happily in the shop for well over a month now, feasting on the crumbs dropped by the shop keeper each day as he ate his lunch. On the previous day, the mouse simply had the misfortune of being in the wrong place at the wrong time and was finally discovered by the old man by pure accident.

Before the sunlight began to shine through the large windows in the front of the store, the mouse had made sure to begin his scavenging for the day. As the tiny creature roamed behind the counter, searching for the days meal, the sound of a key opening a lock could be heard, followed by the squeaking of the aged door and the ring of the small bell that sat just above the door. The mouse scurried quickly behind the waste basket once again, waiting for the right moment to escape to the safety of the wall across the room.

Meanwhile, the old shop keeper entered the room and moved toward the crack in the wall. After taking a moment to survey the area, he knelt down, removed a small trap from his coat pocket and carefully placed the contraption on the floor directly in front of the entrance in the wall. When he was finished, he slowly began heading in the direction of the counter. The mouse peered around the corner as the old man approached, waiting for just the right moment. By chance, the old man happened to glance down in the direction of the mouse, just as the mouse looked up at the old man. Their eyes met briefly and in that moment, a feeling of kindness came over the shop keeper as he stood still, looking at the rodent. In that instant, the old shop keeper made the decision to try and catch the mouse alive so he could release the little critter into the fields behind the shop, but the trap was already set. Before he could even turn to go remove the trap, the mouse darted around the corner and past the shop keeper. As he turned in a vain attempt to stop the rodent, a loud snap could be heard that echoed through the room. When his eyes finally reached the floor where the trap had been laid, his heart sunk. In an attempt to sneak into the crack in the wall, the mouse had set off the trap, but to the surprise of both of them, the mouse had managed to avoid the gruesome death and instead was stuck with it’s tail in the trap. The mouse squealed and winced from the pain of it’s tail being stuck and smashed by the trap, but also from the fear of not being able to escape to the safety of the walls.

The old shop keeper pulled some thick leather gloves from a pocket inside his jacket and placed them on each hand as he walked toward the frightened animal. He carefully knelt down and grabbed hold of the mouse and the trap, stood and headed toward the back door of the shop. The sun was beginning to provide more and more daylight with each passing minute as the old man began walking the distance out into the field. Once satisfied that he was far enough from the shop he’d left far behind, he knelt once more and gently lifted the spring tight wire that had trapped it’s victim. Without a moment of hesitation, the mouse bolted off into the brush, free of the trap and that dreaded old man. The old shop keeper watched the mouse scurry away until he could no longer see or hear the small rodent any longer, then turned and headed back to the shop.

As he slowly walked toward the door of his shop, a thought of remorse slipped quietly into his mind. In spite of their short time together, the old man suddenly realized that he’d had more excitement in the past couple days than he could recall having had in years! And now, with his little furry friend now gone, the old man would be alone once again.

“Oh well,” he mumbled under his breath, “I suppose I could always let another critter in when I’m ready for another adventure!”