I’m proud to admit that I’ve managed to keep the cell phone number I was given when I made my very first purchase many years ago! While it’s hard to believe how long that’s actually been, this story isn’t meant to be one of reminiscing and day dreaming about days gone by. No, this story is one of a serious matter, one that concerns the vast majority of people on our planet.

I’d like to talk to you about the dangers we face each day by invisible rays of voice & data that are quite literally devouring our brain cells! Now before you start laughing at me and calling me crazy, I’d like to share some facts that will most certainly make you a believer in this very real danger we face!

To begin my argument, I’d like to talk about the youth, and while I’d argue that I’m still among them, the fact is, there are plenty of youth out there younger than I, so let’s focus on the younger youth for the moment, shall we?

The first piece of evidence I wish to submit is of particular concern to me. It seems that everywhere you look these days you see young people wearing clothes that are either too small or two big for their frame. In particular, the girls seem to always be dressing in clothes meant for a younger sibling, while the boys can’t seem to keep their pants up high enough to cover their underwear! At first glance you might feel sorry for the family, thinking perhaps they are just low on financial resources and doing the best they can to clothe their kids, but after some closer observation, you’ll notice this epidemic is a widespread issue that surely can’t mean that all parents are experiencing the same financial woes all at the same time, which leads me to the conclusion that these kids must all be the victim of cell phone brain decay. Now clearly, one of the major symptoms of this horrible disease is the inability to correctly choose the right size clothing. I still can’t explain why the young lady’s seem to always buy smaller while the boys tend to go the other direction, but facts are facts, so I’ll just leave it at that.

Now another major symptom of cell phone brain decay that seems to only affect young people is the inability they now have to entertain themselves without the use of an electronic device. When I was a kid we would spend hours outside playing ‘steal the shoe’ or some other silly made up game that we cooked up to burn energy. See, we had the brain power to make games up back then! Today though, you tell a kid to go outside and play and he throws a fit so bad you’d think he just had a finger or toe cut off! I even bought my kids a dog just so they wouldn’t have an excuse to not go outside and play, and now I have a dog. That one backfired on me! So once again, I have to stick with my theory that with all the invisible bits & bytes floating through the air these days due to the excessive number of cell phones, our young generation is suffering immensely!

Next, I submit into evidence the growing reliance that everyone seems to have when it comes to cell phones. I’ve noticed a growing problem people have while watching TV, Movies or just visiting with friends & family. This condition I speak of is known as ‘cantputitdown’ syndrome where the diseased is seemingly unable to participate in the above activities without simultaneously doing something on their phone. While I too have fallen prey to this terrible condition, it’s my wife that seems to be too far gone for any help. I first noticed it as we’d sit in a dark room watching TV. The light from her phone always lit up her beautiful face in the dark, but then one day it hit me that while it was nice to be able to see her face in the dark, her eyes were glued to the cell phone. The horror one feels when that reality strikes, the knowledge that a loved one has been infected by such an evil ailment is almost unbearable at first I’ll admit, but we’ve been working hard to cope with the disease. I’ve found the best medication to be those subtle, yet loving reminders that it’s alright for her to turn the phone off and just watch the TV with me. Of course, as is the case with any sufferer of such a life altering disease, it’s all too often out of her control as is evidenced by the lashing out and hurtful remarks aimed at me about all the things I do wrong. But I know it’s not her fault and will continue to stand by her side until that time when old man death takes us.

Another example of this reliance, known as ‘cantleavehomewithoutit’ syndrome, is equally debilitating and I might add costly as well! Have you ever needed to run to the store real quick to grab something and while in the car, on the way, you realize “Oh no, I left my phone home”! Even though you’re almost to the store, maybe even in the parking lot, you turn around and head home to grab your cell phone. Not only has this scenario cost you time, but with gas prices so ridiculously high, who can afford symptoms like this these days? Not me, that’s for sure! And yet I’ve done this very thing on more than one occasion which scares the crap out of me because it’s proof that even I’m not immune to the effects of cell phone brain decay! 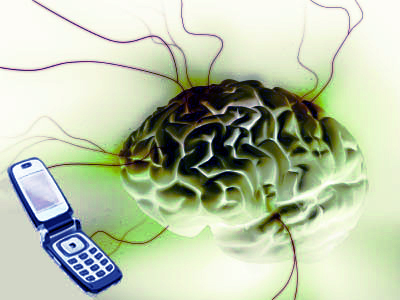 Now I’m no Doctor, so I can’t offer any medical solutions to this epidemic we face today, but I can share a couple of my home made remedies to perhaps help you on some level to combat this disease!

In regards to your kids, make it a rule that when they go shopping for new clothes that you’re with them. Having the support of a loving parent to help them choose the correct sizes will not only help them look better in the clothes they wear, but this should also help boost their self esteem as other kids at school won’t be teasing and making fun of them because their clothes don’t fit. This could also help strengthen your kid/parent relationship too because they’ll appreciate the great help you’re giving them!

Another great way to help your kids is to not allow them to own and use a cell phone until they’re old enough to move out. This will no doubt be a difficult thing as kids these days seem to go through withdrawals when deprived of technology for too long, not to mention the fact that they may go into random fits of rage and let you know how much they hate you. But you can rest assured that they don’t really mean it and it’s just the cell phone brain decay talking. Just be strong and know that the day will come when your kids will thank you for everything that you’ve done for them! And by the way, Mom, Dad, thanks for everything you’ve done for me! Sorry I’m so late for saying it!

Now the reliance issue is a bit tough to deal with. Trying to take a cell phone away from your wife when she’s consumed in the world of Farmville or some other mind altering game or activity would be about as safe as trying to wrestle a carcass from a starving Grizzly Bear or to swim with man eating sharks in the middle of a feeding frenzy! I don’t know about you, but I’ve watched my share of Discovery Channel over the years, so I’m not all that interested in losing an arm over a cell phone.

So I guess aside from the little efforts we can attempt to make on our own, our best hope still lies with science, that one day smarter people than myself will be able to find a cure for this worldwide epidemic that today seems like a battle we just can’t win. I’m holding onto the hope that one day we’ll be the victors in this battle, but until then, don’t you dare take my cell phone away from me or else!