When I was a kid, believe it or not, I did some stupid things! I remember playing with a friend of mine once in my parents basement, getting into things we should have left alone. Working our way to a stack of boxes, we decided for some reason that it was important to unstack them, only, they were heavy. Have you ever heard the sound of shattering china? Needless to say, my Mother was not happy and though I’ve clearly blocked out the memory of my certainly horrible punishment, I’ll never forget that feeling in my gut and the words in my head saying “Ought-oh!” 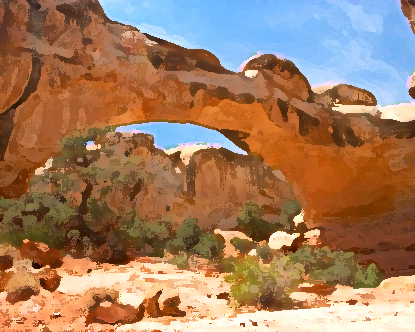 Year’s later, as a teenager, I recall a camp out one year in Scouts. We ventured to Utah’s beautiful Capitol Reef. There was the skunk incident at dinner one night—luckily we all made it out alive! And of course there were the campfire stories told, both scary and funny I’m sure. Though to be perfectly honest, most of the trip is really a blur to me, overshadowed by an event that went down in history known as “Operation Rescue Ronny”. Only that’s not what really happened!

As I recall, I was, as usual, with two of my best friends at the time (who remain to be my good friends to this day), exploring a trail in the area. We were with the group on this particular day, but some of us thought it would be fun to go off and do some exploring of our own. I won’t be naming names, but it wasn’t my idea, though I did follow! What can I say, teenager!

We came upon a large bowl of sorts, carved into the mountain from the red sandy rock that was prevalent throughout the area. This particular bowl we discovered was quite easy to get into as we were able with ease to run right down the steep sides into the bottom of the large open bowl. After we had become board with our exploration of this large bowl, and decided it was time to move onto something else, we met our dilemma. While it was quite easy, though perhaps not the safest thing, to run down the steep side to get into the large rock bowl, getting out proved to be a bit more of a challenge! Running toward the edge in hopes of getting out the same way we entered only ended in failed attempt after failed attempt, as we found our speed was not sufficient to get us far enough up the side of the curved wall. Climbing out was also not an option as we quickly realized the sides were just too smooth with nothing of substance to hold onto.

Now in my older years I’ve come to realize the value of exercise and physical fitness which, as a teenager, I was less interested in and therefore was not in the kind of shape that my friends were. So after several attempts to get out of the large bowl and back on the trail, my companions and I began to experience the feeling of mild panic, though I don’t recall any of us admitting to it at the time! For me, that panic became a realization that, if my two friends who were in much better physical condition than I and were still unable to make their way out, my odds didn’t look good at all!

As we continued to survey our surroundings, looking for an alternative exit, a stroke of genius hit me, which I quickly shared with my friends. Alone we were all too short to make our way to the top, but if one of us were to boost the others up, the added height may be just enough to reach the top, after which the remaining person in the bowl could then simply be pulled out. Since it was my idea, and probably because I was the chubby one of the trio, I got to play the part of the stepping stool!

Well, the plan worked great! I had essentially rescued my friends who quickly ran off to find a rope so they could pull me out of the bowl. Now here’s where the story goes south. Upon meeting up with the rest of the group, instead of emphasis on the part of the story about how Ron had rescued his friends, sacrificing himself for the greater good, it became the story of how Ron got stuck in a big rock bowl and rope was needed to rescue him from the predicament! As I recall, the story became a famous one throughout the neighborhood for a time, and to this day, lives on the minds of my friends and I as one of the great adventures we shared in our youth.

As all of us learn with time, it’s the memories of friends and family that matter most as we age. And before long, if we’re lucky, we end up with little green men (and girls) of sorts, kids of our own who we get to watch and laugh at as they do and say the craziest things each day! Point in fact, I’ve now been blessed with four little aliens of my own, two boys & two girls, who have managed to cause me both stress beyond my years as well as joy and laughter I’d have never known. Each one has a personality that often makes me wonder who’s kids they actually are, since there’s ‘no way I ever acted like them’ until my wife reminds me that, to this very day, I’m still guilty of doing some of the same things I shake my head at when it comes to my kids! But at the end of the day, as I watch my own kids, it’s fun to hang onto those glimpses of my own youth—the good and the not so good—as I helplessly watch my children grow before my very eyes. Life really is too short and though I’m probably still not old enough to say this in the company of some, it is still so very true that ‘youth is wasted on the young’!