Shadow on the Mountain | Free Sample 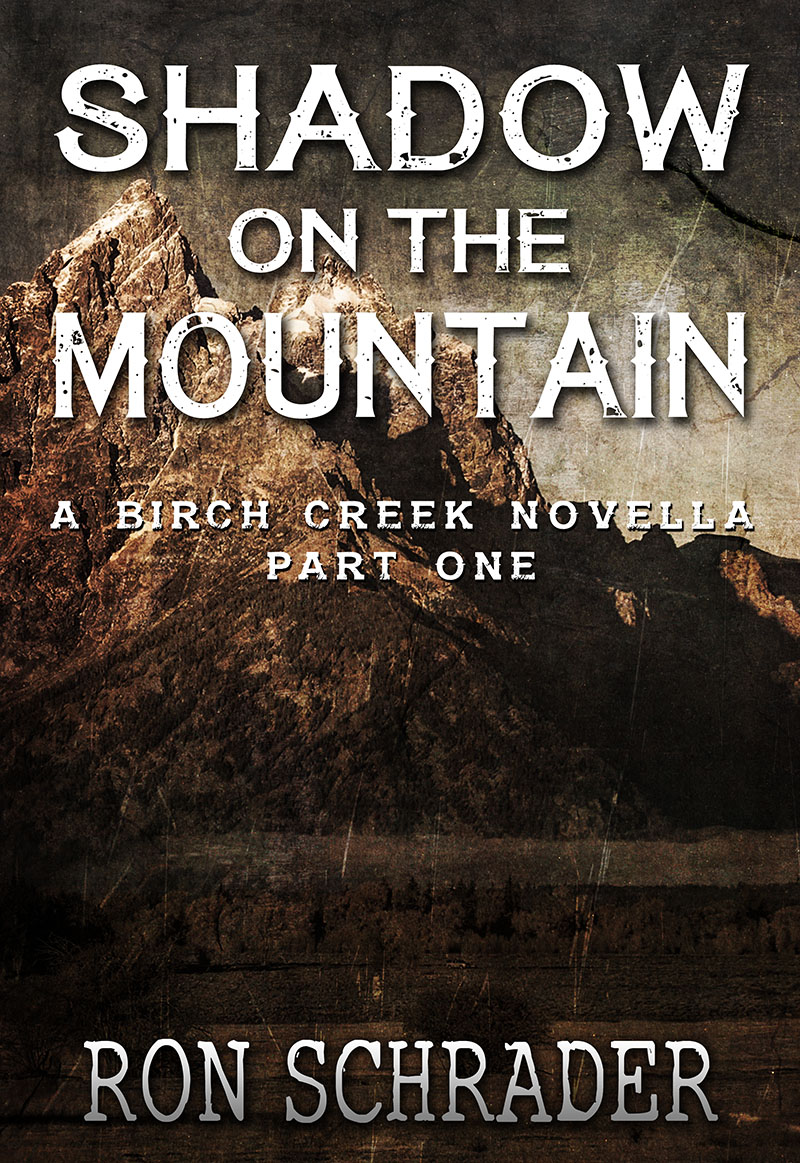 Just before Travis reached the small grove of aspens he hoped would provide some cover, he felt a sudden burning in his leg, followed immediately by the echo of a gunshot. He dove to the ground and, after a quick inspection with his hand, confirmed the bullet had only grazed him. Relieved it was just a minor scrape, he scrambled once more to his feet and zigzagged the remaining few yards to the trees.

It wasn’t until his back was planted against a large trunk that he heard the sporadic sound of splitting wood as bullets whizzed all around him. Then it went silent again.

“Ya shoulda minded yer own business,” a voice called out. “Yer a dead man.”

Travis didn’t respond. He held his pistol up close and stared into the cylinder only to be reminded that it was full of spent cartridges, with just one bullet remaining. Travis shook his head and reached one last time into his pants pockets, digging straight to the seam, but came up empty like before.

The cracking of a branch that was much too close started his heart racing again, and he mumbled, “Gotta move.” Without delay, he bolted from his position and headed farther up the mountainside toward the thick overgrowth there. He barely paid notice to the sound of the gunfire that started up again, choosing instead to focus on his escape and praying that a bullet wouldn’t find his back.

Earlier in the day his pursuers had managed to kill his horse, but even on foot, Travis had proven a worthy adversary. He’d been hunting in these hills with his uncle since he was a boy and knew the area well. This, he hoped, would give him the advantage he needed.

As he hiked up the steep terrain, Travis found himself wishing he’d never agreed to get involved in something meant for a lawman, but it was too late to undo what had been done. His best chance now was to stay off the trail and do whatever he could to make things harder on the men following him. The number of trees alone, many of them growing close together, would likely force them off their horses and slow their pace. Even if they chose to stay on the trail, the extra time they’d have to spend riding around and up would still give Travis a nice, comfortable lead.

When Travis reached the trail again, nearly an hour had passed. Not a single shot had been fired during that time, and he assumed the men had chosen to stick to the trail. But Travis didn’t allow himself to become complacent. He continued to push his tiring body up the trail, heading toward a cavern he knew the men following him would never find.

It wasn’t long before he reached his destination, but it was starting to get dark. He stopped to catch his breath for a moment and looked around to make sure no one was near. Satisfied he was alone, Travis walked alongside several tall bushes until he located the concealed entrance. He pushed the branches aside, took one last glance behind him, then slipped into the darkness.

Frank Mullan pulled gently on the reins and brought his paint to a stop. “Any sign of him, Doug?” he called out to his foreman.

“It’s gettin’ too dark,” Doug said. “We oughta set up camp. Start after him again at first light.”

Doug turned his horse around and galloped back toward Frank. “It’s no use, boss. We have a better chance of gettin’ lost than finding a man out here in the dark.”

Frank slapped his leg and said, “Then you and the men better find him in the mornin’, or it’ll be your skin on the line.”

Frank nodded, then turned his paint down the trail. “There was a clearing maybe twenty feet down. I’ll be there waitin’ to set up camp fer the night.”

“We won’t be far behind ya, boss,” Doug replied.

Frank eased his horse forward and headed down the slope. It was a lot steeper going down than up, forcing him to go slower than he wanted, and he was relieved when he finally reached the opening and more level ground.

He dismounted and led his paint toward a fallen tree, then sat down and waited, gritting his teeth as he thought of the young man who’d somehow managed to avoid a bullet today. Travis had stuck his nose into some business that wasn’t his, and Frank had no intention of letting the young man off this mountain alive, no matter the cost.

The sound of breaking branches interrupted his angry thoughts, and moments later Doug appeared in the clearing, followed by the other two men who’d volunteered their services in hunting down the spy. “Get a small fire goin’, and we’ll take turns keepin’ watch,” Frank ordered.

Doug nodded, then turned to the other men and said, “Let’s gather up some wood.”

His own fire wasn’t very big, but the heat it emitted was a welcome relief from the cold Travis had endured the past few days. It hadn’t snowed yet, but he could tell winter was just around the corner. As he warmed his hands, he wondered if the light from the small fire could be seen from outside the cavern. But he also knew the odds of someone passing by this place were pretty small, and he pushed the thought aside. Keeping warm and getting some much-needed rest were among his bigger concerns. He figured Frank and his men would likely be doing the same thing tonight.

Travis reached into his coat pocket, pulled out his last piece of jerky, and took a big bite. He chewed it slowly, savoring the salty flavor, before taking another bite and finishing the unsatisfying meal. After his last swallow, he took a swig of water from his canteen, then laid down close to the fire. In the morning he’d have to figure out what to do for food, but tonight, for the first time in three days, he was going to get some sleep.

“Do you really think he’d be dumb enough to come sneakin’ up on us?” Doug asked.

“When a man gets hungry enough, he’ll do a lotta dumb things,” Frank replied. “Everything he had with him was strapped to his saddle, and it’s ours now.”

“Sounds good,” Frank said. “Doug, you can take third watch, and, Carl, you get the early morning shift.”

Carl sneered at him. “Whatever you say, boss.”

“Now, I know you’d rather be back in town tonight getting’ drunk, but my word’s good. I said you’d get an extra month’s pay for this, so stop with the attitude,” Frank said.

“Sorry, boss,” Carl said as he shied away and moved to his bedroll.