Why I Don’t Build Stuff

It’s important for most men to have a collection of tools in the garage, but knowing how to use them, well that’s a given, right? WRONG! Some people have this crazy idea that just because a man owns, say a power saw for example, that he knows how to properly use it. This assumption is just unfair. 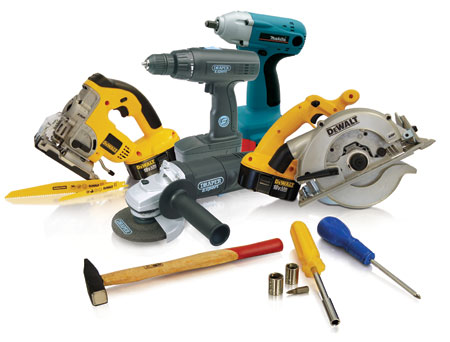 “How did he acquire the power saw?” would be a good question to first ask yourself. If it was a gift, it’s unfair to assume that he knows how to use it. I for one own at least a few tools that have been given to me, and while I take pride in my growing collection of tools, both power and otherwise, I am certain at this point in time that I will rarely, if ever, use many of them! It’s not that I don’t want to use them, believe me, I do, it’s simply because life will be better for myself and those around me if I don’t!

Case in point, I took on the project of sanding my deck to refinish it after moving into our new home. I carefully picked out the proper tool, an inexpensive belt sander. One month later, after spending hours of unpleasant sanding and wasting countless pieces of sand paper, I managed to finish the final piece of wood, only to catch the cord of my ‘new’ belt sander in the belt, nearly cutting into the live wires! This would have never happened had I known from the beginning how absolutely stupid it was to spend money on a tiny belt sander with the intention of sanding an entire deck!

Another example would have to be the time I put new blinds up in the upstairs bedroom. At the time, my ‘power drill’ was a worthless little 6 volt rechargeable piece of junk! It was a glorified power screwdriver at best, but I thought it would be better than doing the job by hand. Nope. After wasting time and spouting off a few choice cuss words, I ended up with blinds installed and an extremely sore and tired hand.

And this, my friends, is why I will never work in construction or do any major building project!…at least not without some supervision from someone who actually knows what they’re doing!